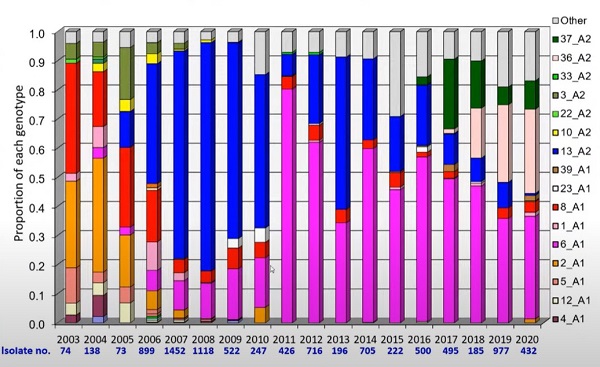 Late blight 2018 (Genetic changes including aggressive 37_A2 and 36_A2; cultivar resistance; virulence and aggressiveness of isolates)

Biology and control of Phytophthora infestans 2017 (Genetic changes; sources of inoculum; the Hutton Criteria as a replacement for the Smith Period)

Phosphite and disease resistance 2012 (Suppression of blight infection by phosphite, due to increased plant resistance)

Elicitors, effectors and disease control 2011 (How is disease overcome or disease resistance stimulated?)

Blight epidemiology 2001 (Crop losses due to blight; influence of environment on disease development)

Late blight 1995 (A1 and A2 blight; the importance of leaf wetness)